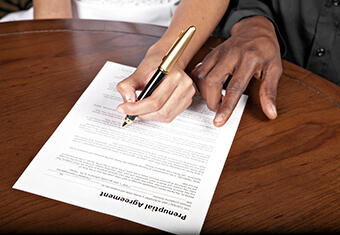 Family Court judges have wide discretion as to the division of assets on divorce. At a time when families and their assets are becoming increasingly complex and often spread across different countries, you can protect your own or family wealth by entering into a prenuptial or postnuptial agreement with your spouse, or spouse to be, to set out how assets would be split if you were to divorce.

Prenuptial agreements are contracts entered into before marriage. Although still perceived as an American phenomenon, they have long been normal practice in many countries across the world. It was only in 2010, however, that they became legally enforceable in the UK, after the landmark case of Radmacher v Granatino. Since then, they have steadily gained popularity as an effective way of future-proofing a relationship.

Whilst, unlike commercial contracts, prenuptial agreements are not binding, they are considered to have ‘magnetic importance’ and will only be disregarded by the Family Court if they are obviously unfair.

Postnuptial agreements are particularly useful where, for example, one of you is to give up work to look after children, or if you are considering separation, but decide to stay together and want to lay down some ground rules.

Why make a nuptial agreement?

By determining who gets what in advance, nuptial agreements allow couples to avoid protracted and acrimonious litigation in the event of divorce. Some couples choose to cover just their main business and trust interests or inheritance, and others address the relationship more comprehensively.

Some uses of nuptial agreements are:

However they are used, nuptial agreements must be entered into with proper legal advice and full disclosure of assets in order to best ensure, as far as possible, that they are upheld by the Family Court.

Hannah Southon is a Director of Vardags, London, UK